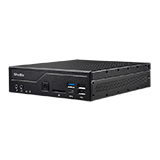 Based on the new H410 chipset, the DH410S is ready for 10th Gen Intel processors in the LGA 1200 package. With up to 10 cores of processing power, the platform supports up to 64GB (32GB x 2) of DDR4 memory, integrating UHD graphics and PCIe controllers to deliver outstanding performance onboard.

The DH410S features Shuttle’s exclusive heat-pipe cooling system with smart fan design. The clever ventilation design allows for constant air circulation between the inside and outside of the machine resulting in high stability and low noise for long-term operation.

The DH410S uses industrial capacitors in order to meet the environmental operation demands of commercial applications.
*With use of SSD and Wide Range Temp. SODIMM

The DH410S is VESA mount compliant and allows for versatile integration into hardware systems. This space-saving capability is well-suited for digital signage and kiosk applications with limited space.

Save energy costs as well as the cost of on-site service with Power-On by RTC function. Set automatic ‘Power On’ and ‘Power Off’ times by RTC via BIOS. Power on by RTC can also be turned on and off with the Windows task scheduler.

Watchdog Timer provides excellent security protection for systems that need to operate continuously for a long period of time. Use Shuttle’s Watch Dog utility to maintain normal operation and stability of the system at all times.